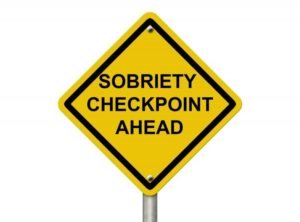 This is my third post on handling DUI/DWI cases in Phoenix, Arizona. My last post discussed various ways your attorney may be able to challenge DUI test results. This article will discuss challenging cases which arise from law enforcement’s use of sobriety checkpoints. Checkpoints are a lawful form of policing in Arizona and are utilized under specific rules for screening driver impairment. The sobriety checkpoint must be publicized either online or in a local paper prior to implementation. The publication need only give a general area, it is not necessary that a specific road or intersection be named. They are usually erected on major roadways, or roads that access the highway and generally on Friday and Saturday nights after 6 pm or during major events such as holidays.

Sobriety checkpoints, also called roadblocks or mobile checkpoints, are actual roadblocks erected by law enforcement to screen sobriety in drivers without probable cause. They lend themselves to a number of challenges due to the conditions under which they are undertaken. There are very specific rules that the police must follow in setting up and executing the checkpoint. The police may not stop each car that comes to the Checkpoint; they employ a mathematical formula for stopping each in a given number of vehicles (e.g. one in four, etc.). There are other rules which are complicated and apply very specifically on a case-by-case basis. Your best option is to engage a qualified sobriety checkpoint attorney to evaluate your case.

The most common ways to beat a checkpoint stop are to challenge the lack of publicity, the failure to follow approved protocol, or to attack the specific conditions under which your field sobriety tests (FST) were administered. If there is evidence you were unfairly singled out due to being in a protected class such as race or ethnicity, you may also have an avenue to attack the stop.

Your lawyer may request records regarding the notice given for the Checkpoint, the organization, and the person in charge. Additionally, your lawyer may need to file a Motion to Suppress Evidence to ensure that all officers involved come to court to testify and demonstrate that the department followed all applicable rules and that you were not unlawfully detained. It can be frightening to encounter a Checkpoint and frustrating to receive an arrest or citation for DUI or DWI when you exhibited no signs of bad driving. It is important to have an experienced and qualified Phoenix DUI lawyer review all the facts of your case and determine which avenues of defense are available to you.

I also represent defendants in other Maricopa County cities such as Mesa, Glendale, Scottsdale, Chandler, and Gilbert. We also assist Pima County residents in Tucson.