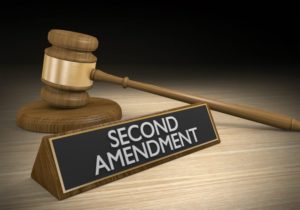 This is the second post in my series on how Arizona criminal charges impact gun ownership rights for those in Phoenix and elsewhere in our state. My last post provided an overview of topics I will be addressing in this series and also discussed the fact that many are misinformed when it comes to the issue of criminal convictions and gun rights. It is important that this confusion be cleared up before one begins their strategy of how to address a charge. In this post I will discuss how being convicted of a crime in our state may impact one’s firearm rights.

Arizona and Federal law prohibit one to own a firearm after they have been convicted of a felony or of domestic violence. The Federal provision, which is governed by U.S.C. 922, means that if one is convicted of an offense in Arizona then they will be prohibited of owning a gun anywhere in the United States. This law carries a maximum sentence of up to ten years in Federal prison. Also, the laws of Arizona and most other states prohibit gun possession by such people even if the conviction occurred in another state.  It is important to understand that for these provisions to apply one must have been convicted of an offense and not just simply charged.

U.S.C. 922, as well as Arizona law, do not simply prevent a felon from owning a gun. They also prevent such persons from possessing a gun. This means that if one is found to simply have control over a firearm then they are in violation of the law. By “control” I do not mean that one actually has to have a firearm in their hand at a given time. Having a firearm in one’s home, vehicle, or elsewhere will likely lead to Federal and state charges. To make matters worse, if one is on probation for their underlying felony or domestic violence charge then they will often see their probation revoked as a result of being caught with a firearm. This means that the defendant may have to serve out the sentence for their underlying charge before serving the sentence associated with illegally possessing a firearm.

The laws regarding possession of a firearm, after a prior conviction, are strict. Judges and society, in turn, tend to show little patience for those who violate these provisions. If you find yourself facing felon in possession of a firearm charges then it is crucial that you hire an attorney who is experienced in this area of the law and who is well versed in handling search and seizure issues. As a Phoenix criminal defense lawyer I am often retained to protect the rights of those accused of illegal firearm possession. Contact my office today if you find yourself facing such charges. In addition to Phoenix we represent defendants in other Maricopa County cities such as Mesa, Glendale, Scottsdale, Chandler, and Gilbert. We also assist Pima County residents in Tucson.