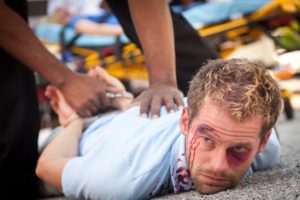 Arizona Courts take domestic violence allegations very seriously. A conviction for misdemeanor domestic violence can result in a permanent criminal record, loss of the right to own a firearm, and the stigma of being a “violent offender.” This is on top of incarceration and fines. Unfortunately, this is also an area of the law where charges are often fabricated by an angry ex or one trying to gain leverage in a child custody matter. Whatever your situation, if you have been charged with domestic violence in the state of Arizona then you require an attorney. Phoenix criminal defense lawyer Bretton Barber is ready to assist you.

Domestic violence matters are complicated because they sometimes involve false allegations. It is not uncommon for people to make false claims of abuse if they are going through a divorce or child custody matter. While it is offensive to have to defend one’s self against false claims, it must be understood that the criminal consequences can range from from a class 3 to a class 1 misdemeanor. Being convicted can mean jail time, fines, the requirement of attending anger management classes, and will often have other repercussions. One convicted of domestic violence in Arizona will be unable to own a firearm and will face more severe penalties for future convictions. If you have been charged with misdemeanor domestic violence then it is crucial that you contact an attorney immediately.

Criminal defense lawyer Bretton Barber aggressively protects the interests of those charged with domestic violence in Phoenix or Maricopa County Courts. Bretton will immediately examine the police reports, any witness statements, and will visit the scene of the incident so that he may formulate a defense. He will help you understand all possible resolutions for the case. Such matters may involve going to trial and establishing either that the accuser is lying or that you engaged in self defense. Other resolutions may include an agreement with the prosecutor. Whatever the outcome of your case, Bretton will ensure that you always understand your options and that you are able to make the best possible decisions. You are facing a serious situation and require assistance. Call our Phoenix office today to speak with an attorney. We also represent defendants in other Maricopa County cities such as Mesa, Glendale, Scottsdale, Chandler, and Gilbert. We also assist Pima County residents in Tucson.

Bretton takes great pride in the level of service he provides to clients. He handles all matters in the office personally. This allows you to rest assured that your matter is being handled by a lead attorney and not an associate. He will stay in regular communication with you throughout the process and often gives clients his personal cell phone number. The Barber Law Group is based on the recognition that the accused are worried about their situations and that they deserve the highest level of representation. Protecting one’s rights is a priority to our office and this priority is why Bretton chose this area of law. Contact our Phoenix office today to speak with a criminal defense lawyer.