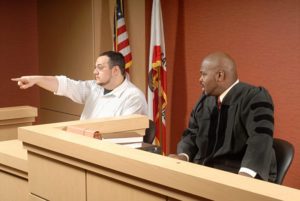 This is the third post in my series on the handling of assault cases in Phoenix, Arizona. My last post discussed when a defendant may claim self-defense and the process for establishing such a claim. It is crucial to understand the concept of self-defense as defendants may not always be able to claim it, even when they were not the primary aggressor. In this article I will discuss the process of excluding eyewitness identifications from an assault trial.

A witness who claims to have seen an offense may not necessarily be permitted to testify in Court. It is possible to exclude the testimony of eyewitnesses if 1) their eyewitness identification was unreliable and 2) the identification was the result of overly suggesting police procedures. An identification will be considered unreliable if the witness did not have an adequate opportunity to view the perpetrator. An example of this would be if the witness only caught a glancing look at the person committing the crime. An identification will be considered overly suggestive if the police take steps which make the witness more likely to identify a particular suspect. An example of this would be placing a bald suspect in a lineup of people who all have hair. If both of these requirements are met then a witness will not be permitted to identify a defendant during trial.

The first step in suppressing an in-court identification is to file a Motion with the Court. A Motion is a written document which explains the law on a given issue and argues why the facts warrant the requested relief. The prosecution will then file an opposition brief and the defendant will file a brief replying to the opposition. Once all pleadings have been filed then the Court will hold an evidentiary hearing and then issue its decision as to whether or not the witness can testify. This can be a complex process and it is crucial that you hire an experienced criminal defense lawyer to assist with it. Contact my office today to speak with an attorney. In addition to Phoenix we represent defendants in other Maricopa County cities such as Mesa, Glendale, Scottsdale, Chandler, and Gilbert. We also assist Pima County residents in Tucson.

Many criminal defense cases hinge entirely on an eyewitness identification.  Examples of such matters include instances in which one is attacked or mugged and never gets a good look at the perpetrator. There may, however, have been other witnesses who saw the event and their description, and subsequent identification, leads to an arrest. In such a case there may be no other evidence other than the identification. This means that suppressing the ID can essentially end the prosecution. Phoenix defendants should hire an attorney to help with the process.