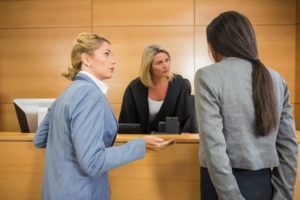 This is the third post in my series on the handling of cases where a Phoenix defendant is accused of violating an order of protection. My last post discussed why defendants must take protective order violation charges seriously. Many, unfortunately, make the mistake of thinking that such allegations are “not a big deal.” Such is not the case and such a defendant may find themselves facing jail time. In this article I will address another important topic – why people are sometimes falsely accused of such charges. I cannot stress enough that you should contact a criminal defense lawyer if you find yourself in such a situation.

Restraining orders are often issued for good reason. Many victims of violence often find themselves in need of help due to an abusive spouse or possible threats of violence. There are, unfortunately, also situations in which one may find themselves falsely accused of violating an order of protection. These situations arise when a party has an angry ex who is trying to “get even.” Another common situation occurs when the person claiming harassment is actually attempting to manufacture a criminal charge in order to gain an advantage in divorce or child custody proceedings. In such instances it is possible that the defendant will lose custody of their child, in addition to their liberty, due to false allegations.

If you have been falsely accused of violating a TPO, of domestic violence, or of stalking then it is critical that you immediately contact an attorney. You may see the accusations as ridiculous as you know they are false. The fact of the matter, however, is that the Judge will take them very seriously and will not hesitate to impose a jail sentence if you are found guilty. I handle such matters in Phoenix, Scottsdale, Tuscon, as well as the Maricopa County cities of Mesa, Glendale, Chandler, and Gilbert. Call today to speak with a lawyer.

Phoenix area TPO violation cases will likely be heard in either the City Court or the Justice Court. There is evidence which can be presented to the Judge to rebut any false allegations. In cases where it is alleged that the accused physically approached the victim then proof that the defendant was somewhere else at the time can be critical. If the victim is alleging that the defendant contacted them via telephone then using one’s cell phone records is a straightforward way of showing that the contact did not happen. Whatever the situation, your counsel will assist you in developing a strategy for defending the case.