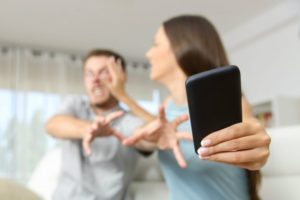 The worst thing a defendant could possible do after being served an Order of Protection is to contact the victim and attempt to convince them to have the Order dropped. Many defendants immediately panic upon being served and worry that an Order of Protection will negatively impact their criminal case. If you are served with an Order of Protection then the most important thing to do is to follow the order. Do not in any way, call, text, email, or attempt to “run into” the victim in question. Even responding to a text message from the person that obtained the Order is a violation of the law and will result in a criminal charge. This criminal charge is also a domestic violence offense, called Interfering With Judicial Proceedings. Violating an Order of Protection will look much worse to the Court than having one filed against you. If the victim attempts to contact you while an Order is in place then the best course of action is to ignore the contact and show the proof of attempted contact to your lawyer. By contacting an attorney you will not only be able to get advice on how to move forward with the charges, but also fight to have the Order lifted and dismissed. You are entitled to a hearing on the need for the Order of Protection, but you are only allowed one hearing so you want to make sure you are prepared.

Many Phoenix residents charged with domestic violence make the mistake of thinking that it is a private matter between two adults. This leads many defendants to contact a victim in violation of an Order of Protection. It is important to understand that the government also becomes involved once you get arrested. Violating an order of protection not only results in new charges but it also makes defending the underlying charge much more difficult. Domestic violence is a charge which is commonly fabricated. Such fabrication occurs in matters where there is a child custody dispute or an angry ex. The way to deal with such a fabrication, however, is not to contact the alleged victim. The correct way of going about defending yourself is to contact a criminal defense lawyer.