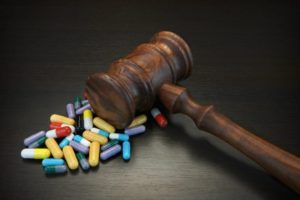 This is the next post in my series on prescription drug cases in Phoenix, Arizona. My last post focused on why Phoenix and Maricopa County residents need to be honest with themselves when deciding whether or not to enter the TASC program. I felt that was an important topic as many enter the program without understanding it fully and, as a result, set themselves up for failure. In this article I will discuss the penalties one faces for a prescription drug  related conviction.

Arizona’s punishment of a prescription drug related offense can be confusing to many. While some aspects of our state’s laws indicate such crimes are charged as misdemeanors, in practice most prescription-related offenses will actually be charged as a class four felony. The reason for this is that such narcotics (including xanax, oxycontin, etc.) typically fall within the definition of “narcotic drugs” or “dangerous drugs.” Prosecutors, in my experience, will opt for felony charges as, among other reasons, they gain more leverage in plea negotiations. There are several other factors which may enhance one’s sentence. These other factors can include the use of a firearm, one’s criminal history, as well as whether other crimes were being committed at the time of the arrest.

The Court will also impose financial fines upon those convicted in a pill-related case. The Court is required to impose a $1,000 fine. There are mandatory surcharges, however, which will be added to this financial penalty. After the additional costs are applied the total minimum fine will equal $2,196 and the Court does not have discretion to reduce these amounts. That means that one will be required to pay the full amount regardless of the circumstances of the case or one’s financial condition.

These are simply the broad strokes of Arizona’s prescription drug sentencing structure. There are many other factors and circumstances which can come into play when punishment is given out by the Court.

The issue which I cannot stress enough is that if one has been arrested for a prescription related offense then they should contact a criminal defense attorney immediately. Your lawyer will be able to work with you to determine whether search and seizure issues were present during your arrest. If such issues were present then it may be possible to have your case dismissed via a Motion To Suppress Illegally Seized Evidence. There may be other issues which can lead to a viable defense. These may include difficulties the prosecution would have with proving intent or another element of the crime. For example, you may have had a valid prescription for the drug or you may have had a medical marijuana card.

Another point you should take away from this article, as demonstrated by the penalties discussed above, is that prescription drug crimes are very much a “big deal.” I service all of Phoenix and other Maricopa County cities such as Mesa, Glendale, Scottsdale, Chandler, and Gilbert. My office also assists Pima County residents in Tucson. Contact my office online or by telephone to speak with an attorney.