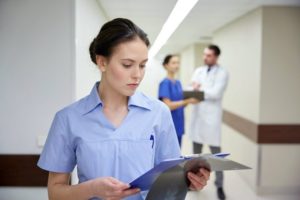 This is the second post in my series on the handling of disciplinary hearings which RN’s face before the Arizona Board of Nursing. My last post provided an overview of topics I will be discussing over the course of this series. I cannot stress enough that one should contact an attorney if they are at risk of losing their professional license. In this article I will address another important topic – the process one faces when charged with misconduct.

The process will be initiated when the Nursing Board receives some type of complaint. The Nursing Board will request a response from the accused RN. If the Board is not happy with the RN’s response, then they will proceed with disciplinary action. This can be informal or formal in nature, and it often involves going before the entire Board of Nursing. It is essential not to go before the board without an attorney who can speak for you. The hearings are public. If one is unhappy with the outcome of the Board’s decision, they can go to an independent body and have their case heard  by the Arizona’s Office of Administrative Hearings. The Administrative Office will send the case before an Administrative Law Judge. The Judge will preside over the eventual hearing in the same way that a civil judge would preside over a bench trial. While there are similarities between this process and a civil trial there are also differences.

Parties in a civil suit are able to propound discovery upon each other. In layperson terms this means that civil cases have a period in which they may force the other side to provide information. In such cases it is possible to obtain records through Requests for Production, answers to written questions through Interrogatories, as well as other information through subpoenas. In a Nursing Board hearing, by contrast, the only way to gather evidence is through interviewing witnesses and acquiring items one has the ability to get on their own. There are only limited tools available for additional discovery. This is a key distinction between an administrative hearing and a civil suit.

Nursing Board hearings will resemble a civil trial in other ways. One accused of misconduct may testify, cross-examine other witnesses, call their own witnesses, and present evidence on their behalf. Objections regarding evidence may be made to the Judge and it is up to the Judge to decide what evidence will and will not be considered. At the end of the hearing the Judge will issue a recommended ruling to the Nursing Board (meaning that the Judge does not decide final discipline). The Board may accept, reject, or modify this recommendation. If the Nurse is not happy with the Board’s final outcome, then the decision may be appealed to the Superior Court.

It is crucial that Phoenix nurses hire a professional license lawyer who is familiar with the procedures and processes described above. Retaining counsel not familiar with this area of law can mean one’s case being mishandled if the attorney is not aware of what to expect. I represent nurses facing the loss of their Arizona license. Contact my office today to schedule an initial consultation. In addition to Phoenix, I represent the accused in other Maricopa County cities such as Mesa, Glendale, Scottsdale, Chandler, and Gilbert. We also assist Pima County residents in Tucson as well as others throughout the state.