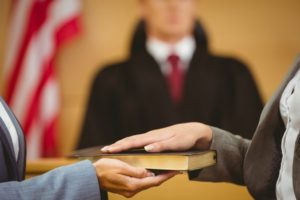 This is the next post in my series discussing the handling of assault cases in Phoenix, Arizona. My last post discussed steps a criminal defense lawyer should take when investigating the charges. It is important that your counsel conduct a full investigation to ensure that you are adequately defended at trial. In this post I will discuss the process of taking your case to trial.

Misdemeanor assault charges will be heard in City Court or Justice Court. Unlike Superior Court felony trials, these cases will be decided by the Judge and not by a jury. The prosecution will present its case first and the defendant will then present his or her evidence and witnesses. The prosecution will be given the opportunity to present a “rebuttal” which can only address issues raised by the defense. Once all evidence has been presented the Judge will then issue a decision. This decision will typically come immediately after trial. If the defendant is found not guilty then the case is immediately over. If there is a conviction then the Judge will sentence the defendant right after announcing the verdict.

Prior to trial it is important that your attorney perform multiple tasks. First, counsel should file any necessary Motions In Limine as a way of objecting, before trial, to evidence which should be inadmissible. Second, it is important your attorney meet with you early to ensure that you know what to expect and that you are prepared to be examined by the prosecutor (should you choose to testify). In addition to helping you prepare to testify, your counsel will have provided the prosecution with a list of witnesses which you intend to call at trial (a requirement in order to call the witnesses) and will have spoken with those people in advance.

If one is convicted at trial then they will have their option to appeal to a higher Court. Convictions entered in City or Justice Court will be appealed to the Superior Court. This appeal takes place through the Defendant’s filing of an opening brief. The prosecution will file a response and the Defendant will file a reply. If the Circuit Court denies the appeal then the case can be appealed further up the ladder – all the way to the Arizona Supreme Court if necessary.

It is important to understand that trial for an assault charge is a serious matter and not a “private issue” between two parties. A conviction for assault will lead to one being labeled as a violent offender, one having a criminal record, the defendant possibly being disqualified from employment or other economic opportunities, as well as being disqualified from certain professional licenses. I cannot stress enough that such charges are not a “do it yourself” project and that you should contact an attorney immediately.

I regularly represent those charged with assault or other misdemeanors in the Phoenix area. Contact my office today to schedule an initial consultation. I also represent defendants in other Maricopa County cities such as Mesa, Glendale, Scottsdale, Chandler, and Gilbert. We also assist Pima County residents in Tucson.