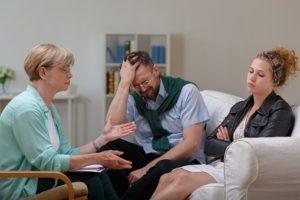 Recent years have seen a rise in people entering the mental health field. Such professionals include marriage and family therapists, social workers, substance abuse counselors, and more. People often enter these fields out of a desire to assist others. Unfortunately there are times when such professionals find themselves in need of assistance due to a Complaint made before the Arizona Board of Behavioral Health Examiners. Such complaints threaten one’s career, future, and ability to earn a living. Sometimes people have difficulty even obtaining a license in the first place because of their past. Our Phoenix lawyer assists professionals in defending their licenses so they may keep their careers on track. If you find yourself in such a situation then you likely need assistance. Contact us today to schedule an initial consultation.

There are a number of situations in which a therapist or counselor may find themselves facing allegations of misconduct. They may have been charged with a felony or misdemeanor, under which case they were required to report the charge within ten days under ARS 32-3208. They may have violated other professional rules by engaging in sexual or personal relationships with a client. Other forms of conduct can also lead to discipline. You can also be denied a license during the initial application process, but that does not have to be the end of the matter. Regardless of the situation it is critical that one facing discipline contact an attorney immediately as representation may make the difference between keeping one’s career or having it ended.

The Arizona Board of Behavioral Health Examiners’ discipline process will typically begin by their sending the professional a notice of the complaint and a request for an explanation of the accusation. If after receiving the response the Board decides to go forward then the Board will review the matter and possibly hold a hearing and make recommendations as to probation, suspension, termination, or a different sanction. If the Board moves for termination, or even if the Board makes a recommendation that a professional finds unfair, one can appeal the matter. At that point a hearing will be held before the Arizona Office of Administrative Hearings. This hearing will be presided over by an Administrative Law Judge and will resemble a civil bench trial (meaning that there will be no jury). The accused will be given the opportunity to cross-examine witnesses and present evidence on their behalf. After the hearing has concluded then the Judge will issue a recommended decision to the Board. The Board will make the final determination regarding discipline and that judgment can be appealed to the Superior Court.

Bretton Barber is a Phoenix lawyer assisting therapists, counselors, and other professionals at disciplinary hearings. Bretton will use your initial consultation to determine what happened and to begin to formulate a strategy. Once retained he will develop a plan to gather evidence and interview any necessary witnesses which could be called in your defense. If the matter involves false allegations of sexual conduct or improper relationships then we will work to build a case which shows the truth of the situation. Bretton will vigorously represent you at the hearing and will be in regular contact with you throughout the process. He regularly provides clients with his cell phone number, returns phone calls within twenty-four hours, and makes himself available to answer questions. We know you are facing a serious situation and Bretton will take it seriously. Call our attorney today. In addition to Phoenix we represent professionals in other Maricopa County cities such as Mesa, Glendale, Scottsdale, Chandler, and Gilbert. We also assist Pima County residents in Tucson.

It is a mistake for Phoenix therapists to not immediately contact an attorney when they have been charged with misconduct. The sooner one contacts counsel then the sooner the attorney can begin formulating a defense. This means one’s lawyer will have more time to interview witnesses, gather other evidence, or attempt to reach a resolution with the Board which protects the accused’s license and avoids the trial process. Do not make the mistake of waiting to speak with counsel. The future of your career may be impacted by doing so.