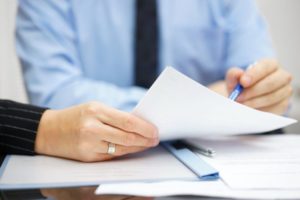 This is my third post in my series regarding defending your license before the Arizona Board of Behavioral Health (Board) after you are accused of inappropriate relations with a client. My last post discussed reasons why Phoenix therapists might face false claims of inappropriate conduct. This post will outline the hearing process a counselor faces in Arizona. There are two separate stages of a complaint, formal and informal. The informal process begins first after someone files a complaint against you. The second is a formal process wherein witnesses can be called. Arizona social workers should contact a licensing lawyer immediately if they face a complaint before the Board.

Initial complaint hearings against Phoenix counselors are informal, followed by a formal hearing if necessary

The first step after someone files a complaint is that the Arizona Board of Behavioral Health (Board) will begin an investigation and send you a notice in the mail. If they believe that public health or safety is implicated in the complaint, your license will (temporarily) be suspended pending the outcome of the investigation. During the course of the investigation the Board will examine and interview any witnesses, and may require that you submit to assessment from a rehabilitative or retraining program approved by the committee.

Formal proceedings begin with a request from the board for a formal interview from you, the licensee. You may refuse, but your license may be suspended and a formal complaint will issue. A negative result after a formal hearing include: dismissal for lack of finding, decree of censure (which is public), probation with conditions, a non-disciplinary order requiring training, and finally license suspension or revocation. The licensee is required to pay the costs of any investigations.

Your attorney will investigate this claim on your behalf. While you are not entitled to any formal discovery, you lawyer may interview the named witnesses as well as any appropriate related witnesses to discover a complainant’s motive to fabricate or lie. It is also important that any witness background and circumstances are investigated to test their credibility. A lawyer will additionally want to gather your own history and testimonials on your behalf. Because there is no formal discovery process, hiring an experienced Phoenix licensing attorney is crucial to safeguarding your license.

Protecting your livelihood should be your priority. Investigation and early intervention are key to obtaining favorable results in administrative hearings of this kind. An experienced lawyer is your best ally in defending against allegations of misconduct. Contact my office today for more information. In addition to Phoenix, I represent those in other Maricopa County cities such as Mesa, Glendale, Scottsdale, Chandler, and Gilbert. I also assist Pima County residents in Tucson.