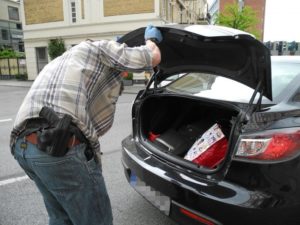 This is the second post in my series on how search & seizure issues impact criminal cases in the Phoenix area. My last post provided a general overview of topics I will be discussing and also stressed the need to consult with an attorney if one feels their rights have been violated. I consider this to be an important subject as, during initial consultations, I am often asked “did the police violate my rights?” In this article I will begin to provide a basic-level discussion of what rights one has once confronted by law enforcement.

The Fourth Amendment to the United States constitution requires that people not be subjected to searches by law enforcement, and that their belongings not be seized, under unreasonable circumstances. It also requires that search or arrest warrants not be issued by a Judge unless “probable cause” justifying the warrant is demonstrated by police. This amendment keeps us from living in a police state and helps to guarantee the privacy of our citizens. Unfortunately, these rights are sometimes violated by Arizona authorities.

Law enforcement officials may not detain an individual simply because they want to. Under Terry v. Ohio, an officer must have “reasonable suspicion” of criminal activity in order to stop a person. This is true whether the individual is on foot or in a vehicle. An officer will have reasonable suspicion if the totality of a situation, combined with inferences which can be reasonably drawn from those facts, support a belief that criminal activity is occurring. Officers may rely on their training and experience when drawing inferences. What does this mean in layperson terms? It means that an officer may stop someone if they reasonably suspect, based on observed facts which they can articulate in Court, that someone is engaging in criminal conduct.

If, for example, the police see an individual standing on a street corner for a prolonged period of time, and that person is attempting to interact with those walking by, then the officers may have reasonable suspicion that such a person is dealing drugs. Simply standing on a street corner, and trying to talk to people, would not be enough for the police by itself. If, however, officers saw that person engaging in hand to hand transactions with others passing by then they would most likely have the ability to detain such a person. The issue of whether the police may detain the person would not hinge on whether the person was actually selling drugs. It would hinge on whether the police had reasonable suspicion at the time they detained the suspect; evidence found through an illegal search or seizure cannot be used to justify the stop by law enforcement.

If an Arizona resident is detained and arrested, without the officer first having reasonable suspicion, then the arrest can be challenged in Court.

Phoenix, Arizona residents may challenge the use of illegally seized evidence

Defendants can challenge the in-court use of evidence which law enforcement seized in violation of the Fourth Amendment. It is important to understand, however, that it is up to the Defendant to challenge the evidence’s use. In other words, the prosecution will be able to proceed unless the accused takes certain steps.

Phoenix, Arizona residents can challenge the use of illegally seized evidence through their attorney’s filing of a “Motion to Suppress.” This is formal request, made to the Court, that illegally seized items not be introduced during a trial. After the Motion is filed the Court will hold an evidentiary hearing. The arresting officer, and possibly the defendant, will testify at this hearing. The presiding Judge will then decide if the Fourth Amendment was violated.

Search and seizure issues present a complicated area of criminal law. If you believe that that the police violated your rights then you likely require the services of a criminal defense lawyer. In addition to Phoenix, I also service other Maricopa County cities such as Mesa, Glendale, Scottsdale, Chandler, and Gilbert and I assist Pima County residents in Tucson. Call today to speak with an attorney.